GPS-based games are part of an innovative and hugely popular niche of mobile gaming that has brought featured several wildly successful titles in the last few years. The hype truly started with Pokémon GO, but many other games have followed the trend to meet the appetite of gamers all over the world for a more interactive and engrossing style of mobile game.

Unfortunately, while most mobile games and apps are experiencing a boost in activity, the COVID-19 pandemic is inherently bad news for GPS-based games. Many countries have imposed strict lockdown measures, meaning gamers are unable or unwilling to go outside, something that is often vital to the dynamics of these games.

However, some titles are managing to adapt to the new way of life by changing the game mechanics. In this article, we use app intelligence data from the Mobbo platform to look at some of the apps that are successfully making it through these difficult times.

How Has Pokémon GO Adapted?

Pokémon GO was the first major hit in the GPS-based gaming niche, and it has enjoyed continued success with over 350 million total Google Play downloads and similarly huge numbers from the App store.

It is also a great example of how GPS-based games can adapt to the restricted world in the midst of a pandemic. In late March, Niantic, the developer, announced a range of changes to the app aimed at making it more ‘lockdown-friendly’. For example, indoor activities are now tracked more accurately, and players can now socialize with others more easily without actually meeting them in person.

As the Mobbo-generated chart above clearly shows, the strategy seems to have paid off. Downloads are now back at very similar levels to before lockdowns hit countries all over the world, despite a dip in numbers throughout April. It also achieved the enviable accolades of being both the top free app and top-grossing mobile game during the pandemic period. 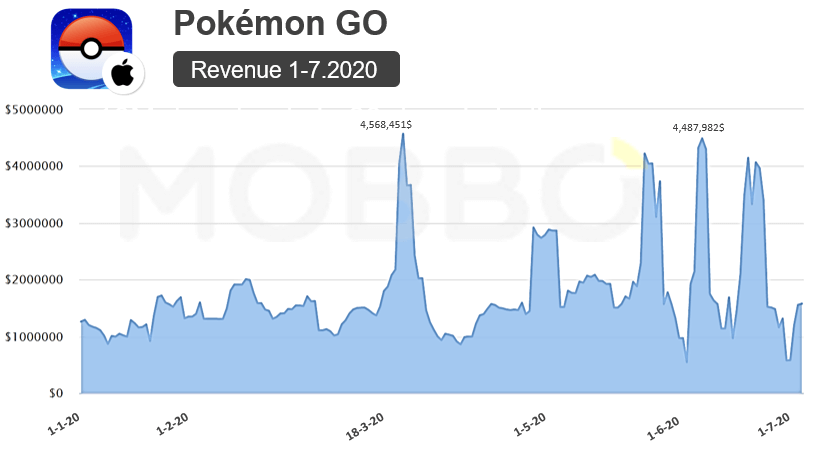 The revenue aspect here is particularly impressive. Pokemon GO, a GPS based game being the top-grossing game during quarantine is something that almost nobody would have expected a few months ago. However, as the chart below illustrates, the game generated huge revenues even throughout many parts of May, June, and July.

Interestingly, Niantic have attempted a similar strategy with another of their titles, Harry Potter: Wizard’s Unite. This has failed to have the same effect, and the game has seen a decline in sales over the last few weeks. This implies that effective marketing is also crucial to the success of GPS-games at this time, and that there may also be an element of luck involved.

What Other GPS-Based Games Have Managed to Stay Relevant?

Minecraft Earth is another GPS-based game published by the popular Minecraft brand that uses augmented reality to give a fresh experience themed around the beloved Minecraft world.

Still in early access phase in some countries, Minecraft Earth has managed to maintain a high overall number of downloads, even achieving a yearly high in late June, as shown by the chart above.

This can probably be explained by the strong IP on top of the updates made to the game in late March, including higher Tappable spawn rates and densities, as well as the ability to spawn new adventures from any location.

Geocaching is a modern treasure-hunting app, based around using GPS functionality to explore outdoors. In this case, players use GPS to navigate the real world and find hidden ‘caches’.

This gaming model is clearly something that is directly affected by lockdowns and a reduction in people leaving their homes. However, as the Mobbo chart above shows, the Geocaching app has actually seen an increase in downloads in recent weeks as compared with the start of the year. 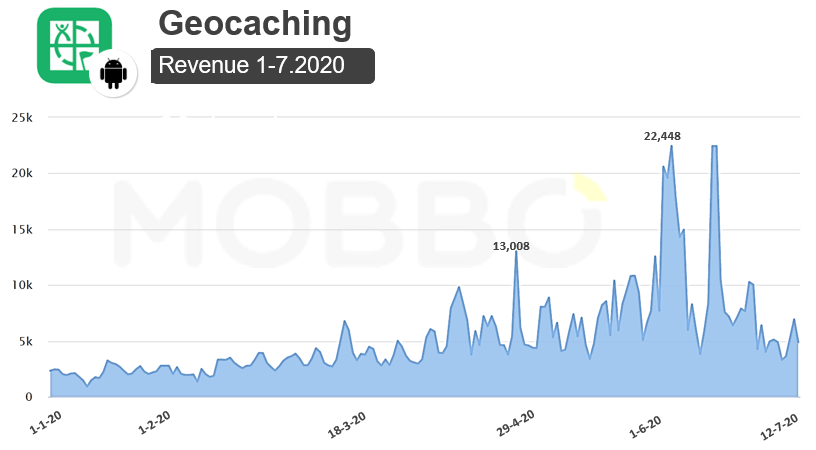 This can be a difficult time for many GPS-based mobile games, but that doesn’t mean they can’t survive and even thrive in the new environment. It seems that the apps that have successfully adapted to the new demands caused by the pandemic have reaped the rewards, or at least managed to avoid a decline in activity.

Pokémon GO is the clearest success story here, managing to actually surpass all expectations and become the top-grossing mobile game during the pandemic. Perhaps other publishers and developers who are currently struggling can take a leaf from Niantic’s book and work alter the dynamics of their GPS-based games if they want to turn around their fortunes.

Mobbo provides in-depth app intelligence insights to the mobile marketplace, perfect for advertisers, developers, publishers, and anybody with an interest in the mobile app industry. To discover how Mobbo can benefit you, schedule a free demo at below blue button.