The use of intellectual property (IP) is a common feature in modern mobile gaming. Just as it has been used for decades in the gaming industry as a whole, IP is now being used extensively in mobile gaming, but does it work?

The primary and obvious benefit of IP is that it has enormous potential to increase the exposure of a game. The downside is, of course, the cost of acquiring the rights, which can be prohibitive for many developers.

In this article, we’ll look at some examples of IP being used in the mobile gaming marketplace right now. Using data taken directly from Mobbo, we break down and compare the popularity and revenues of different games to see they’re performing and ask the question: Is IP worth it?

How is IP Being Used Successfully?

A number of titles using recognizable IP have achieved significant success in recent months. A great example of a developer that has used IP on several occasions is Jam City. The US publisher has released a string of hits, regularly hitting the top charts.

Jam City published three IP based titles: Harry Potter, Frozen, and Family Guy. Harry Potter: Hogwarts Mystery being the most successful title, which has achieved over 626,000 downloads and $3.6 million in revenue in the measured 30-day period alone.

While this is only one publisher, it illustrates the massive potential of IP to boost the popularity and profitability of games.

Are There Any Downsides?

If IP can make games so popular then why isn’t everyone using it? Well, the clear issue is that strong IP is expensive and difficult to obtain. Using the Harry Potter: Hogwarts Mystery game as an example, while it has clearly been effective for Jam City, Harry Potter is also one of the highest grossing franchises of all time. The owners (Warner Brothers) fully understand the value, and hence will charge appropriately for any IP rights.

Jam City is a large company, with around 500 employees across multiple locations, so they have the infrastructure in place to make it worth it. However, smaller and less experienced publisher may struggle to commit the necessary resources, from the initial IP investment to marketing, development costs, and more. 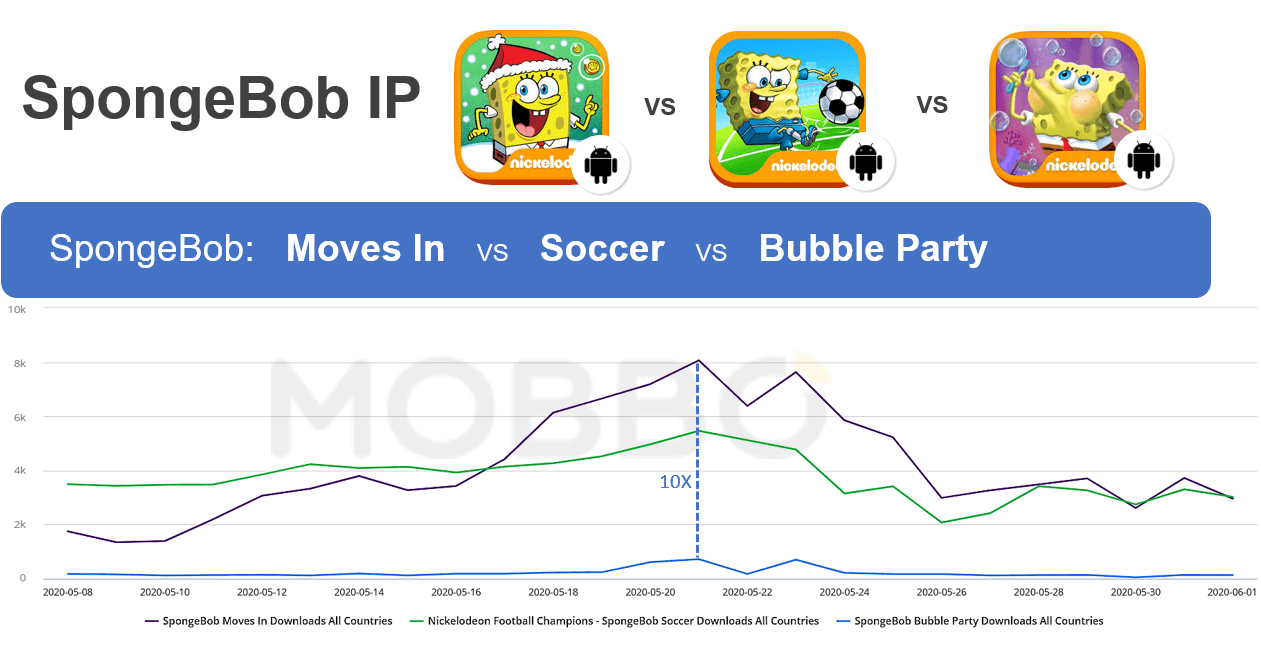 Even experienced publishers can get it wrong as can be seen in the chart above, also taken from Mobbo. It compares three games from Nickelodeon, all using the SpongeBob Squarepants IP. It’s clear from the data that one title – SpongeBob Moves In – has been far more successful than the other two. This perfectly illustrates the fact that IP alone is meaningless. The relative success of SpongeBob Moving In over the others is most likely due to a combination of other factors, such as timing, better marketing, having an overall stronger development strategy, and probably some degree of luck.

SpongeBob: Krusty Cook-Off – from Tilting Point, another big publisher – is a further example of a title using SpongeBob IP that has had great success in recent weeks, successfully hitting the top charts worldwide. Again, this shows how many different factors can influence the success of games using IP.
We couldn’t even include SpongeBob: Krusrty cook-off in the same chart as the other titles as it’s performing at a totally different scale.

It’s no secret that IP can turbocharge the visibility and desirability of a game. However, it’s clear that before developers dive into it head first, they should carefully consider whether it is truly worth the cost. With the right marketing and development team, IP can help a game rise to the top of the charts in both downloads and revenue, but there is a definite risk involved, particularly for smaller developers.

Mobbo provides powerful app intelligence into the booming mobile marketplace. We offer bespoke data that can give invaluable insights for developers, publishers, marketers, and vendors in the mobile app industry.

To learn how you can benefit from Mobbo, get in touch to schedule a demo.